My election prediction record is 95 percent since I started broadcasting in Virginia on January 2, 2012. Not bad! 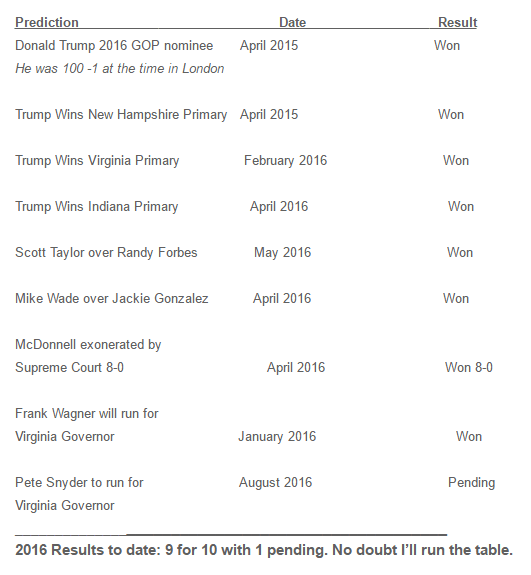 So here are my Election Day November 8, 2016 predictions thus far:

It all adds up to a nearly flawless track record! I’m right a whopping 95 percent of the time.

A Gallup poll on October 26, 1980 blared out these results, two weeks before the 1980 election: Jimmy Carter 47 percent – Ronald Reagan 39 percent. You know the outcome.

Many of today’s crooked polls that are sponsored by the news media keep trying to skew the turnout models to show an inevitable Clinton victory.

This is designed to “crap out” or dispirit Trump supporters, pummeling them with bad numbers to keep them from volunteering time or money or even bothering to vote.

Even after manipulating the polling, Clinton’s lead is dwindling to next to nothing.

The next misleading media mantra will be: “Trump can’t win the electoral college!” It’s nonsense. Here’s why:

There are three scenarios for a Trump victory in November.

Naturally, if there is a Trump wave, he could also win Michigan and Wisconsin. I believe all polls understate Trump’s vote by a hard 2 percent, and in some cases as much as 3 percent. These are under the radar screen voters; those who are registered but have not voted in a decade or more. They just show up on election day, vote Trump, and go home.

Joe Morrissey, defying all odds, wins on the first ballot.  “Fightin’ Joe,” written off as road-kill by the so-called professional politicians and pundits ten times over, will be Richmond’s next mayor.

Here’s how he does it:

Morrissey needs to win five of Richmond’s nine precincts to win a first ballot (no runoff) victory. If no one carries at least five districts, Richmond voters choose their next mayor in a run-off between the two highest popular vote finalists.

Morrissey is poised to win four precincts going away: three, five, six, and eight. He is currently polling slightly ahead in district seven.

There are a plethora of viable candidates running, which divides the anti-Morrissey vote. The theory of one or more dropping out to stop Morrissey is remote. All any of the other candidates need to do is hold “Fightin’ Joe” to four districts on November 8, finish second, and best him in a runoff. So why would anyone abandon their race?

Neither scenario is likely, and Morrissey could even win a December run-off, as his voters are very motivated. Joe wins. Get over it.