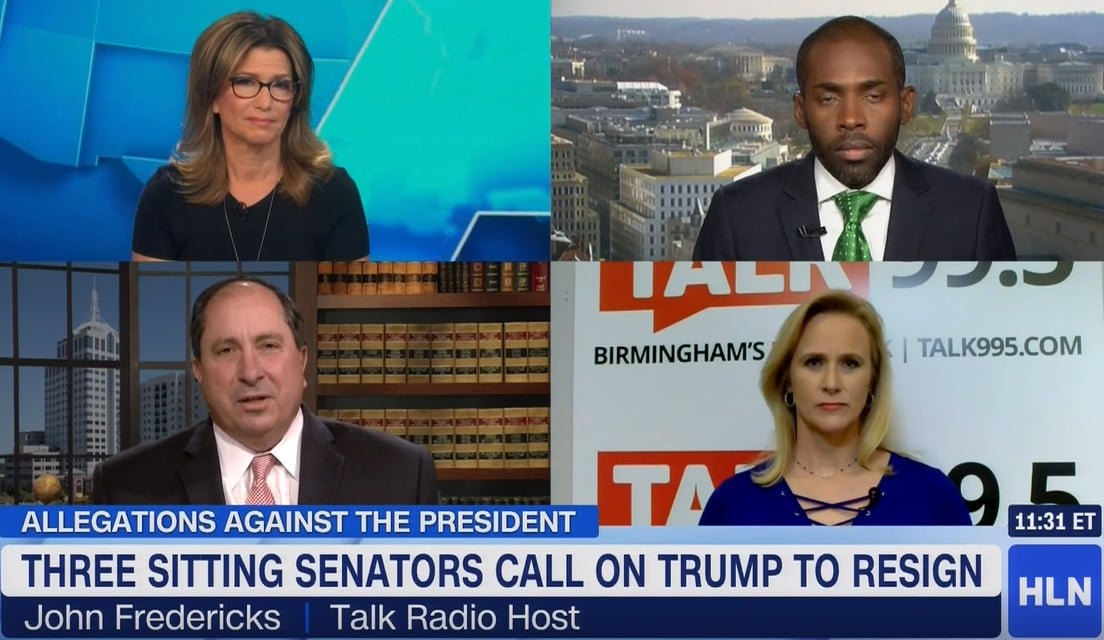 Fredericks on CNN: More lies from the Fake-Newsers who can’t accept the fact that Trump won.

AM 570 is the new home of DC’s conservative talk radio format known as “The Answer”.

For many years, The Answer was found on 1260 AM. Recently Salem Media Group acquired 570 AM and moved the powerful conservative talk format to the stronger AM 570 radio signal. AM 570 continues to feature the best talk-show hosts in America: Hugh Hewitt, John Fredericks, Mike Gallagher, Dennis Prager, Sean Hannity, Jay Sekulow, Frank Gaffney, and Michael Medved.

Fredericks on CNN to Don Lemon and Joe Madison on Roy Moore: “Let the voters of Alabama decide – you think they’re stupid. I don’t.”

Like Steve Bannon at the Breitbart office, Lewandowski stays upstairs when he’s in town. The lower floors house a lobbying firm and sometimes a radio show.

“You could call this the Turnberry embassy,” said John Fredericks, a friend of Lewandowski’s who sometimes broadcasts his syndicated radio show, “The John Fredericks Show,” out of the dining room and allowed a POLITICO reporter to join him there.

Pressed on that description, he corrected himself.

The clearest evidence linking Lewandowski to Turnberry, though, may be the row house. Asked whether the house was Corey’s personal office or Turnberry’s offices, Fredericks said there wasn’t a distinction.

“Turnberry is Corey’s public affairs company,” Fredericks said. “They’re one and the same.”

The house, built in 1900, is owned by the Citizens United Foundation, according to Washington, D.C., property records. It’s not clear whether Lewandowski, Turnberry or another entity rents the house or whether Lewandowski is allowed to use it for free.

Lewandowski worked with David Bossie, Citizens United’s president, on “Let Trump Be Trump: The Inside Story of His Rise to the Presidency,” a book due out next month. Bossie did not respond to requests for comment.

Lewandowski “does TV and radio interviews” in the house, said one person who knows Lewandowski and has been to the row house. “He lets friends of his use it. It is pretty open-door.”

One of those friends, Fredericks, said Lewandowski will sometimes “just come downstairs and pop on” his radio show.

The house also provides nods to Lewandowski’s new influence in Washington, a city where few had heard of him before he took the helm of Trump’s campaign in 2015.

Read the full article from Politico.

Fredericks on HLN: Mitch McConnell and his swamp friends think Alabama voters are too stupid to be trusted with their US Senate choice.

Nobody saw it coming. Not the pundits or the pollsters, not even the Donald himself. From the backrooms of Trump Tower to the studios at Fox News to the VIP lounges of his victory bash, this is the story of Donald Trump’s Election Day—perhaps the wildest, weirdest 24 hours in American politics —as told by dozens of the people who found themselves at the center of it (including Conservative Radio Host, John Fredericks.)

John Fredericks, a pro-Trump radio host who advocated for bringing the president to Virginia, said Trump’s absence left his supporters unenthused. A presidential rally, he said, wouldn’t have fired up the Trump opponents any more than they already were.

“Ralph Northam ran on one message: Trump sucks,” Fredericks said. “Many of us didn’t think that was enough in a governor’s race. But it proved to be the message that carried the day.”

Read full article “Virginia Republicans try to sort out a bloodbath after first big electoral test of the Trump era” from the Richmond-Times Dispatch.